In 2019 Whitehopleman was retained to profile and estimate the manufacturing costs of cement factories in Morocco. Western Sahara was a part of that Moroccan cement industry profiling.

The population of Western Sahara is estimated at just over 500,000, of which nearly 40% live in Laãyoune, the largest city in Western Sahara and capital of the northern region of Laãyoune, Sakia El Hamra.

The first cement plant to be established in Western Sahara was the Indusaha grinding plant of Ciments du Maroc. The plant was originally established in 2001 with annual capacity of 250,000t/y. In 2010 the capacity was doubled to 500,000t/y. 60% of the electricity requirements are provided by an associated wind-farm. 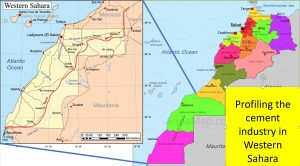 t in Laãyoune, also based on Cemengal’s Plug&Grind XL technology.

Not actually in Western Sahara but just north in the southern Moroccan region of Guelmim Oued Noun, Cemos Ciment commissioned their 300,000t/y, Loesche CCG cement grinding plant at Tarfaya in early 2019. 75% of the cement sales from this plant were expected to be to Laãyoune.

Also in 2019 Les Cimenteries Marocaines du Sud (CIMSUD) commissioned a 500,000t/y grinding plant in Laãyoune, based on ThyssenKrupp technology. This plant was acquired shortly after commissioning by Ciments du Maroc.

In total some 1.4 million tonnes per year of cement grinding capacity is therefore installed to supply the Laãyoune market with a population of ~300,000 people. Annual per capita consumption of cement would need to be nearly 5 tonnes per year to utilise this capacity. That is not going to happen. With the consolidation of Indusaha and CIMSUD presumably only one of these plants will be operated.